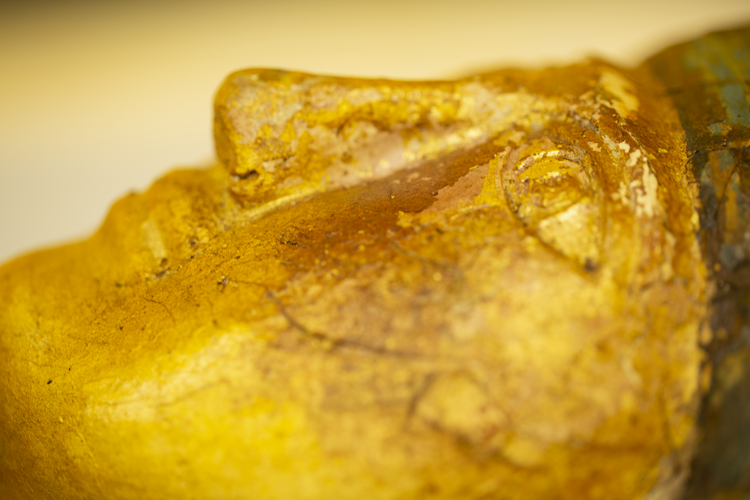 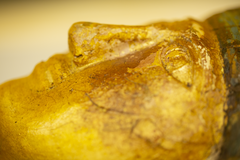 Nespaperennub's Coffin: This coffin is comprised of three nesting parts. Translations of the hieroglyphs reveal that it belonged to a priest named Nespaperennub (“Nes”), who worked at the religious complex of Karnak in Thebes (modern-day Luxor). They describe Nes as the “Gatekeeper to the Temple of Amun.” Updated translations from 3D digital models recently revealed the proper spelling of his name, which means “he belongs to the house of gold.” Being a priest, Nes held an elite and influential position in society which afforded him an elaborate burial. He was buried in a rare triple-nested coffin, of which there are only a few surviving examples worldwide. CT scanning revealed that he died at about forty years old from natural causes.

In ancient Egypt, many aspects of daily life centered on preparing for death. Elaborate tombs and mummification rituals were a key aspect of one’s journey to the afterlife. The Global Museum’s collection contains many significant funerary objects, dating back 3,000 to 4,000 years. In life, however, cultural traditions were surprisingly similar to ones we still practice today. Ancient Egyptians adapted their lives to survive along the fertile Nile River in an otherwise arid desert. In today’s geopolitical boundaries, the country of Egypt is in northeastern Africa. Historically and culturally, however, Egypt is considered Middle Eastern.

Through a recent research partnership with the Near Eastern Studies Department at UC Berkeley, we are fortunate to learn more about these collections through new methods. In 2019, Associate Professor of Egyptology Rita Lucarelli and graduate students Kea Johnston and Matthew Whealton used photogrammetry to produce 3D digital models of the coffins of Nespaperennub and the Yellow Mummy. Visit their website, linked below, to view the models, along with other ancient Egyptian coffins featured in the Book of the Dead in 3D project!

Height
66 in
Width
16 in
Depth
8.5 in
Copyright
Copyright status unknown. Some materials in these collections may be protected by the U.S. Copyright Law (Title 17, U.S.C.). In addition, the reproduction of some materials may be restricted by terms of gift or purchase agreements, donor restrictions, privacy and publicity rights, licensing, and trademarks. Transmission or reproduction of materials protected by copyright beyond that allowed by fair use requires the written permission of the copyright owners. Works not in the public domain cannot be commercially exploited without permission of the copyright owner. Responsibility for any use rests exclusively with the user.
Views
2001