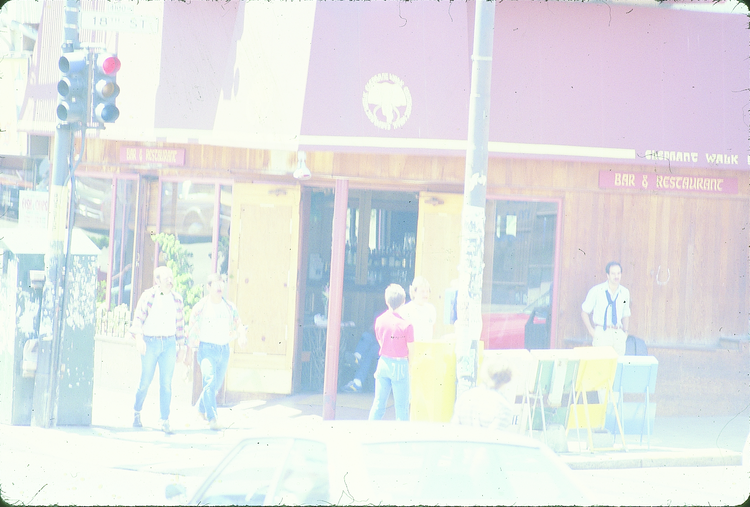 Elephant Walk Bar on Castro at 18th Street; Over-exposed slide but shows many of the windows boarded over. This bar took on a special significance in the hours after the Dan White murder trial verdict was announced. (Dan White shot and killed Mayor George Moscone & gay Supervisor Harvey Milk on Nov. 27, 1978 in their offices in City Hall.) A year later the trail ended with a verdict of manslaughter and a sentence of 5 years. Outraged (but not completely surpirsed), thousands gathered in the Castro and Civic Center, a score of policemen, with ID badges hidden, came to the Castro and had their own riot. The Elephant Walk took the biggest hit: windows were smashed, most of the interior trashed and some patrons were clubbed. The Elephant Walk became the symbol of gay anger & police brutality, sort of a San Francisco version of Stonewall. Later, in 1988, a major fire destroyed much of the building and rumors that McDonalds would replace the Elephant Walk brought strong support of the restoration of the building, both facade and business. The community won and the Elephant Walk remained. But in 1995, the owners of building raised the rent from $13,500 to $21,000 a month; Gay landlords can be equally greedy. It was replaced by Harvey's, a bar/restaurant named after Harvey Milk. This was ironic since the landlord did not support Harvey Milk's political campaign.