East side of Steiner Street south of Fulton Street - 1983 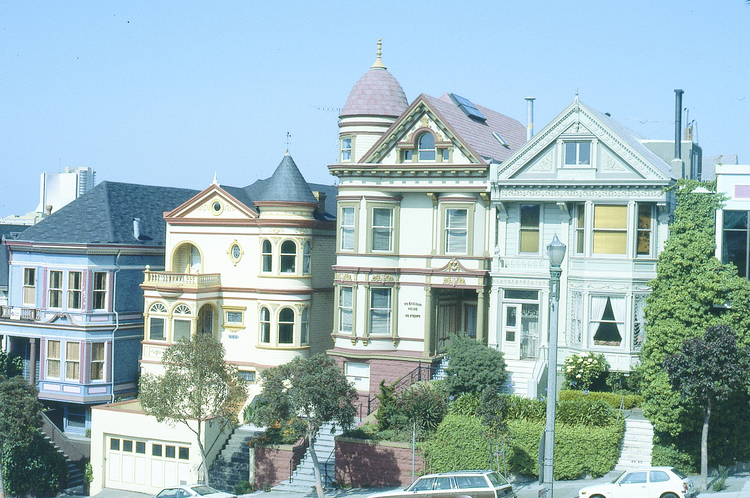 The landscape features four buildings, the three on the right are Queen Anne style, two with a Queen Anne Tower. The one on the left is a Classic Revival. The far right building was built in 1899 and the color scheme, which is mostly monotone gray and white, most definitely not a "look at me" color scheme. The second house from the right has a prominent Queen Anne Cap and a sign that says "Friendship House." In 1963, 818 Steiner Street was sold to the Christian Reformed Board and Missions of Grand Rapids, Michigan. Using the name "Friendship House", this operated as one of the few facilities to serve the needs of the American Indian. Though initially it served both men and women, it evolved to serve men with drinking problems. In 1982, the Reform Board gave up their California House and it was bought by the St. Anthony Foundation for a halfway house and work program for men up to their twenties who have completed a drug or alcohol program. They can stay there for up to six months. In April of 2006, a garage was put in. 850 Steiner Street, the second building from the left, was built in 1899. The garage was added around 1916. 896-898 Steiner Street, the Classic Revival in blue, was built by Mathew Kavanaugh in the stick-syle in 1888.