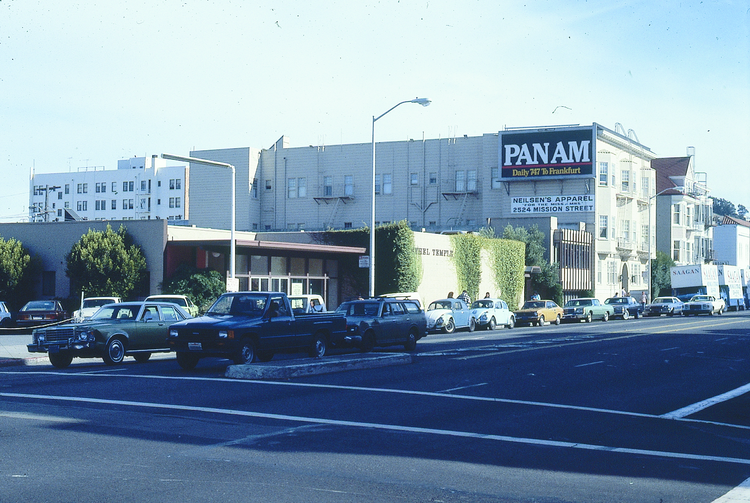 The Bethel Christian Church was formerly called Bethel Temple, renamed after Jim Jones and his Peoples Temple had ruined the temple image. In 1920, a Swedish Baptist Church at 856 Capp Street received the "Holy Spirit" and converted into the Scandinavian Full Gospel Church, and changed meetings to residential homes. They met in a variety of homes until they purchased the old Baptist Church at 856 Capp Street. The current lot was purchased, and the church was built from 1952-1954. The building was plain and was clearly intended as a first stage; offices on Valencia Street were then added in the 1970s. The Church also owns several buildings nearby, which they use for a school and offices, as well as a gas station across the street. No longer a Scandinavian church, many Scandinavian Americans still live here. In 1993, the new church exterior was finished except for the entryway; the interior is an empty room. In 1995, the church is finished with the first service held upstairs in February. Bethel is a good example of contemporary religion in the United States: It is a conservative, fundamentalist church and its congregation is growing rapidly. In 1993 they also had a Korean, Spanish, and Filipino language speaking congregations that met separately. In 1995, the Koreans moved to the East Bay or merged with the main congregation. Their growth comes from the very strong adult outreach; about 60-70% of visitors, who often become members, are single adults. 75% of members are city residents with only about 25% of members from the surrounding neighborhood. See related slides.