The original campus for San Francisco State Normal School was completely destroyed in the 1906 earthquake and fire. Despite the total destruction of the building and records, President Frederic Lister Burk temporarily moved the Normal School to Oakland’s Grant School within weeks. Students were ferried to Oakland for eleven weeks until a new site could be obtained in San Francisco’s Western Addition, a city block bordered by Buchanan, Haight, Laguna, and Waller streets. 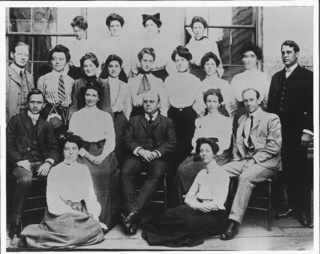 Two students graduating from San Francisco State Normal School. During the "Ritual of the Teachers' Guild Service," graduating students wore robes trimmed with a sash and trim in the original school colors of green and gold. President Frederic Lister Burk developed the Ritual as Normal School's commencement exercise in 1909 and it was performed annually for 20 years, so that future teachers could consecrate their commitment to the teaching profession prior to entering the profession. The Ritual of the Teachers' Guild Service was an elaborate graduation ceremony for San Francisco State Teachers' College that was held at the Greek Theater at the University of California, Berkeley on Sunday, June 1, 1924. This image is from the published program (page 31) with the caption, ñO come to me, ye children.' The opposite page in the booklet contains the 'Teachers' Creed.' Although the number of graduates from this class was small, about six thousand spectators came so witness the spectacle. Photograph of students doing paper crafts enrolled in the People's Place with their student teacher. The People's Place was a teacher training school run by San Francisco State Teachers College under the direction of Sociology professor Bertha H. Monroe in 1922 as part of its Department of Immigrant Education, Home Teaching and Night School Service. San Francisco State student teachers at the People's Place taught English language pronunciation to recent immigrants, specifically Italian, Spanish, Scandinavian, Slavs, Japanese, and Chinese, along with exercises, games and songs. It was located at the Telegraph Hill Settlement House in North Beach, San Francisco, California. 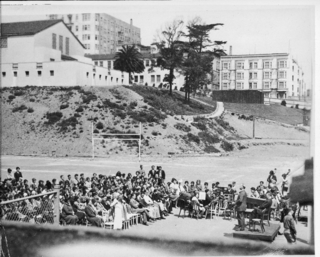 President Alexander Roberts and a female student light the fire to burn the old shacks at San Francisco State Teachers' College in October 1929. The shacks included the cafeteria, home economics, and the lunchroom. Students search the rubble for souvenirs after the burning the old shacks at San Francisco State Teachers' College in October 1929. The shacks included the cafeteria, home economics, and the lunchroom. 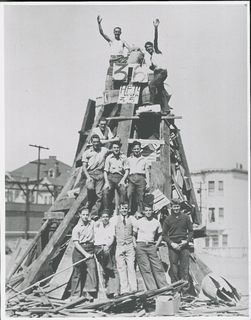 Students pose on a woodpile erected for a bonfire rally at San Francisco State Teachers College. Music professor Eileen McCall Washington (1907-1994) taught vocal art of Renaissance music at San Francisco. She organized the Madrigal Singers, the first group on the West Coast devoted to studying the English madrigal, contrapuntal folk songs written for mixed voices and performed a capella, in Spring 1931. They were so widely acclaimed that they performed bi-weekly concerts broadcast over the western NBC radio network heard locally on radio stations KPO and KYA, and they traveled to Stanford University to perform and teach Stanford students about early music. Students gather on the College Lawn at the Buchanan Street campus of San Francisco State College during Summer Session. The earliest known student protest at San Francisco State College occurred in 1938, when students went to the streets in front of College Hall to create awareness of dangerous wooden buildings. One placard reads: "We want buildings not woodpiles." Photograph appears in 1938 Franciscan (book 2, page 5). At the height of the Great Depression students became concerned with crowded conditions in San Francisco State buildings and began to protest. Journalism students working on a deadline

Students work on the newspaper. Students gathered in the cafe at San Francisco State

Students in the College Hall Caf_ at San Francisco State College in 1939. Lew Jost and Ed Pierce talk to Ed Smith (right) near Anderson Hall on the San Francisco State College' s Buchanan Street campus. Smith was the Representative for the Associated Men' s Students in student government. This image also appears in the 1939 Franciscan on page 15. With funding from the National Youth Administration, SFSC students were hired to clear willow trees and brush from the future site of San Francisco State College in February 1940. Students earned 25 cents per hour. SFSC President Alexander C. Roberts is seen in the center of the photograph kneeling. Coach Dick Boyle, known as the "Blue Ghost," and the Gater gridders were buffeted by bad breaks and ill-fortune and wound up the 1940 football season with three wins out of eight played games. This photograph of the season opening game between University of Nevada and the San Francisco State where the Gaters took a drubbin of 47-0. Some of the starters for this season were Chad Reade, Ben Olsen, Ken Gomes, captain Guido De Ghetaldi, "Rock" Lowrey, manager Dick Schwab, Bob Cummings, Pete Mirande, and Ray Lang. "The Rock" student housing for men

Residents of "The Rock" do their laundry. Before there were dormitories, men lived in housing known as "The Rock." Collage images of student activities and support of the war effort at San Francisco State College during World War II. This collage was used in the 1942 Franciscan (page 9). During World War II, students balanced work and school with civic wartime efforts. The American Red Cross organized on campus in 1943 under the direction of President Alexander C. Robert' s wife. The San Francisco State chapter opened its doors every Tuesday and Friday from 10:00 am to 4:00 pm in order to provide a place for students, faculty, and parents to sew and make gifts for servicemen and women. Photograph of San Francisco State College Unit of the American Red Cross display of handmade articles made during World War II to support the wartime effort on the home front. The American Red Cross organized on campus in 1943. The San Francisco State chapter opened its doors every Tuesday and Friday from 10:00 am to 4:00 pm in order to provide a place for students, faculty, and parents to sew and make gifts for servicemen and women.