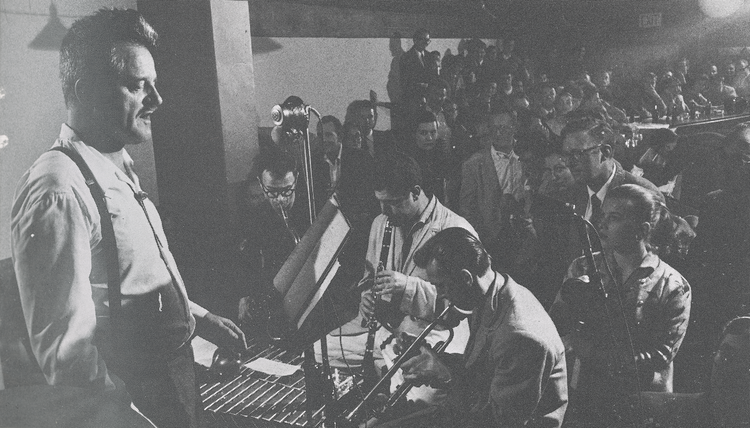 Photograph of poet Kenneth Rexroth reading poetry at a jazz session at San Francisco State College's Gallery Lounge for a Poetry Center event. English professor Ruth Witt-Diamant established the Poetry Center in 1954. Witt-Diamant wielded enormous power in the postwar literary world that emerged in San Francisco. During the 1930s the campus's Poetry Club regularly met at her house on Mendoza Avenue for readings. Poets including Dylan Thomas, W.H. Auden, and Madeline Gleason were among her personal friends, and would read their work for her classes. While on sabbatical traveling in Europe and India, Witt-Diamant came up with the idea for the Poetry Center after watching a spontaneous eight-hour long poetry reading in India. On that trip she stayed for a time with Dylan Thomas and his wife in Wales. Thomas advised Witt-Diamant that in the minds of San Francisco poets, "all sorts of 'nasty ideas' were to be found," which "ought to be flushed out and paid for." In 1954, Witt-Diamant persuaded President J. Paul Leonard to invite Auden to speak at the dedication ceremony for the Lake Merced Campus. San Francisco State gave him a $200 honorarium, and he gave half of it to Witt-Diamant to start the Poetry Center. The Poetry Center was established to stimulate both student and community interest in the enjoyment and writing of poetry, and one of its legacies has been the "California Poets in the Schools" program that came out of the weekly reading series. Lecturer of Creative Writing and assistant director of the Poetry Center Robert Duncan asserted, "The Poetry Center as made us all more aware of the variety of poetic life and has played its role in the great increase of activity in this region." Creative Arts lecturer Kenneth Rexroth stated, "The best way for a poet to function, over and above publication is in direct touch with an audience… a living contact with society is essential… the Poetry Center of San Francisco meets all of these qualifications."